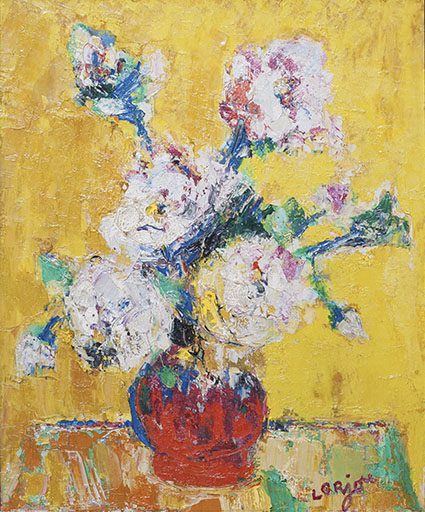 Post-Modern artist Bernard Lorjou was born on September 9, 1908 to an extremely poor family in the Loir et Cher department of France.
In 1924, at the age of 13, Lorjou left his home for Paris, the city where he would earn his reputation as one of the most powerful political artists of his time, famous for his expressionist, figurative style and vibrant colors.

In 1931, Lorjou traveled to Spain and visited the Prado Museum where he was exposed to expressionists such as Goya, El Greco, and Velàsquez, inspiring him to paint. By 1934, Lorjou had set up an artist’s studio in Montmartre with his partner Yvonne Mottet, also a painter. From the very beginning of his career, his work was inspired by current world events, and as he progressed as an artist and his popularity grew, he focused more specifically on violent events, such as massacre, murder, and war.

In 1957, Lorjou painted a very popular series titled Massacres of Rambouillet which he displayed in a self-built shack on the Esplanade of the Invalides in Paris, the collection being a reaction to the Soviet Union’s invasion of Budapest. Lorjou then moved the shack to Brussels where he displayed a series of massive paintings, some reaching lengths of 30 ft, denouncing France’s war in Algeria. This would not be the last time Lorjou would anger the French government with his powerful images criticizing their actions. Lorjou painted a second series on the Algerian War in 1960, but instead of satirizing the French government as a whole, he specifically targeted Charles de Gaulle.

Throughout the rest of the 70s and up until his death in 1986 at the age of 77, Lorjou continued to paint images of great controversy, using his medium to protest the violent events of his time. These include a series protesting the massacres in Palestine and another representing the tragedy of AIDS in 1985. By the end of his life, Lorjou had created thousands of paintings, ceramics, sculptures, illustrated books, stained glass windows, and murals. Throughout his entire career, Lorjou used oil and acrylic paints of vibrant colors in his exciting expressionist style to create visual weapons against injustice and violence.

Lorjou is supported by prominent art figures like Georges Wildenstein and Domenica Walter, the widow of Paul Guillaume. Lorjou becomes known for his extravagant exhibits and combative spirit. His works are exhibited widely throughout the world, namely in France, the United States, and in Japan.